FLI-06 (313967-18-9) was discovered in a screen designed to monitor the trafficking and processing of a ligand-independent Notch-enhanced GFP reporter. It was found to disrupt the Golgi apparatus in a manner distinct from that of brefeldin A. It inhibited general secretion at a step before exit from the ER which was accompanied by a tubule-to-sheet morphological transition of the ER. Thus FLI-06 is the first small molecule acting at such an early stage in secretory traffic1. 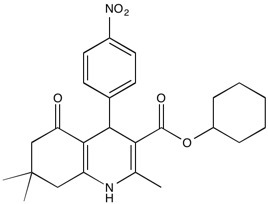