Evodiamine (518-17-2) is a quinolone alkaloid isolated from Evodia rutaecarpa.1 Evodia Rutaecarpa is a very popular herb used in traditional chinese medicine to treat a variety of ailments. Evodiamine has been shown to elicit a variety of biological effects including induction of apoptosis, inhibiting cancer cell proliferation, promoting cell cycle arrest in G2/M, inhibiting invasion and metastasis of cancer cells, inhibiting angiogenesis, induction of oxidative stress and subsequent apoptosis and inhibition of NF-κB.2 It also functions as an agonist of TRPV1 (EC50 = 1.03 μM)3 and acts as an anti-inflammatory agent4. 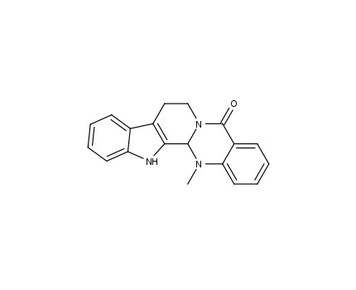