Lomerizine (101477-54-7) is a clinically useful calcium channel blocker (L and T-type).  It is used for the treatment of migraine headaches, however its antimigraine effects are believed to be due to its 5HT2A antagonistic effects.1 Lomerizine also displays anti-glaucoma effects via an increase in ocular circulation and protection of neuronal cells against retinal neurotoxicity with minimal cardiovascular effects.2 Lomerizine has also shown various other neuroprotective properties.3-6 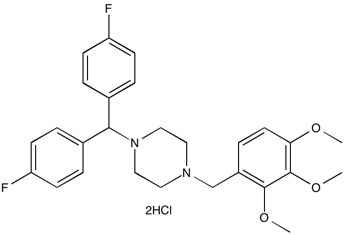